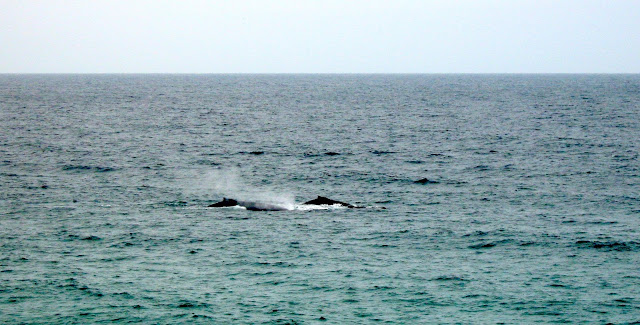 I have a recurring dream. I dream of a bay. It is a wide bay, with turquoise water, verdant islands and deep blue channels. I am standing on a headland, scanning the ocean for a sign. Often as not, I see nothing, but every so often I am rewarded with a white puff of vapour. A whale's blow. The whales are always elusive, almost out of sight and I never know whether they are going to appear. When they do, I am filled with peace and gratitude, as if they are a gift sent to me by nature. During years of dreaming, my night whales have come closer, sometimes tantalisingly so; close enough that I can look down upon them from the cliff.
My next adventure involved turning this dream into reality.
It was May 11th, 1993 and my parents, my sister and I had trekked to the top of Bangalley Head, on Sydney's northern beaches. We were now camped on a rock ledge overlooking the ocean. It was my birthday, and it was raining. We were armed with one umbrella - under which we now huddled - a barbequed chicken, two pairs of binoculars and a bottle of Seaview champagne.
This quest on which I had persuaded my family to join me started many years earlier. I read about the Blue Whale when I was no more than five or six years old. I was captivated by the massive, torpedo-shaped animal on his lonely journey through a seemingly empty sea. And I learned that whales were being hunted to extinction. Indeed, it would be another twelve years before Australian whaling ceased. It became my passion to see a whale, but I feared that by the time I grew up and travelled to a place where I might be able to see one, they would all be gone. The best I could hope for was to dream about them.
And during those early years of dreaming, without me knowing it, the population of Humpback whales migrating along Australia’s coastline slowly increased. Then a colleague at Sydney University told me it was possible to sight them from Sydney’s headlands at the right time of year.
I had been dragging my family up to Bangalley Head for a couple of years now. But we hadn't yet had much luck and the ritual of setting up camp and waiting for a sighting before opening the champagne was growing old, and in order to pass the time, the other expedition members took matters into their own hands.
"Oooh, a whale!" my sister cried, pointing out to sea.
The rest of us sprung to high alert, snatching for the two pairs of binoculars, "Where?"
"Half way to the horizon."
"Which direction?"
"Past the tree ..." this was not helpful, as Bangalley Head was covered in trees. "Past the small tree between the two taller trees. Go out half way, then a little to the left ..."
Having thus distracted us, Kate grabbed the bottle of champagne from the cool bag and popped the cork. Thereafter we amended the rules to require a confirmed sighting before the champagne could be opened. But in light of the fact that we had not yet managed any legitimate sighting, let alone a confirmed one, the champagne would always eventually be opened; either in commiseration, or to bring good luck next time. For my family, it was as much about being together as it was about the whales. Not so much for me though, and I would continue to scan the oceans until my eyes hurt, or until the light went and it was past time to head home.
The following year, it was just me and my parents hiking the bush track to our look-out rock, as Kate had moved to England. But this year I had learned that early July was the best month to see the migration, and we finally got both the site and the timing right, because as we negotiated the narrow bush track we heard a helicopter overhead. By the time we reached the lookout the chopper was hovering above the water and, to my absolute astonishment, I saw a huge black tail slapping the sea.
I cried. My dream had come to life. 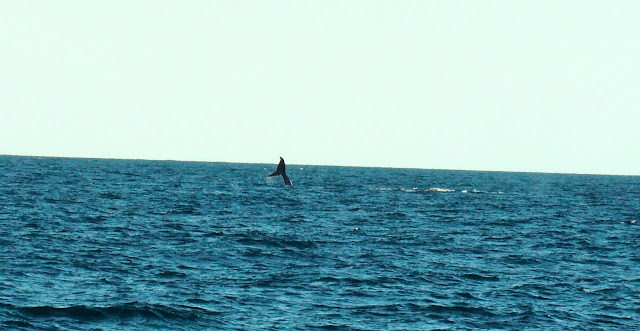 Nowadays, you can see whales migrating past pretty much any headland along Australia's east coast between Mallacoota and Cairns. Some people even see them from the Manly Ferry as they traverse Sydney Harbour on the way to work. They are mostly humpback whales, but you can also see southern right whales, pilot whales and - if you are extremely fortunate - orcas. I guess I was lucky that I dreamed of whales, rather than white rhinos or Siberian tigers, which would have been much less likely to migrate past my front door twice a year regardless of how well their population recovered.
My brother-in-law, Martyn (a delightful outcome of Kate's journey to England) says I see whales everywhere, including the bath tub. I think he is joking, but other friends have expressed similar sentiment when I yell, "A blow!" and they spend ten minutes watching for the creature to reveal itself again. But sometimes you are just looking in the right direction at the right time, and fortune rewards you. There are no guarantees, though, and that is what captivates me most.
I have watched whales from Sydney's North Head, South Head, Bondi beach, Kiama, Narooma, Eden, Byron Bay, Surfer's Paradise and Mackay. Not to mention Albany, Margaret River and Fremantle. I have seen whales in so many places not because I travelled there specifically, but because they were the closest vantage points to where I happened to be at the time. Anyone who lives near the ocean can give it a try. And the chances are, while you are waiting, and watching, other people will be drawn to find out what you are looking at.
"Have you seen any whales?"
"What sort of whales are they?"
"Why are they migrating?"
With a little research, you can become an amateur-expert on whales (or birds, or ocean currents, or whatever it is you are interested in), and those people will leave the headland knowing a little more, and your passion might just rub off on them, and who knows where that might lead? For me, every journey to the headland is an adventure, and every sighting is a reward. I have tried to combine this passion with another, that of watching the full moon rise. One day, I would love to see whales playing in the trail of moonlight that leads to the stars.
I haven't yet, but maybe you will?

Copyright Geraldine B Hunt - February 05, 2018
Email ThisBlogThis!Share to TwitterShare to FacebookShare to Pinterest